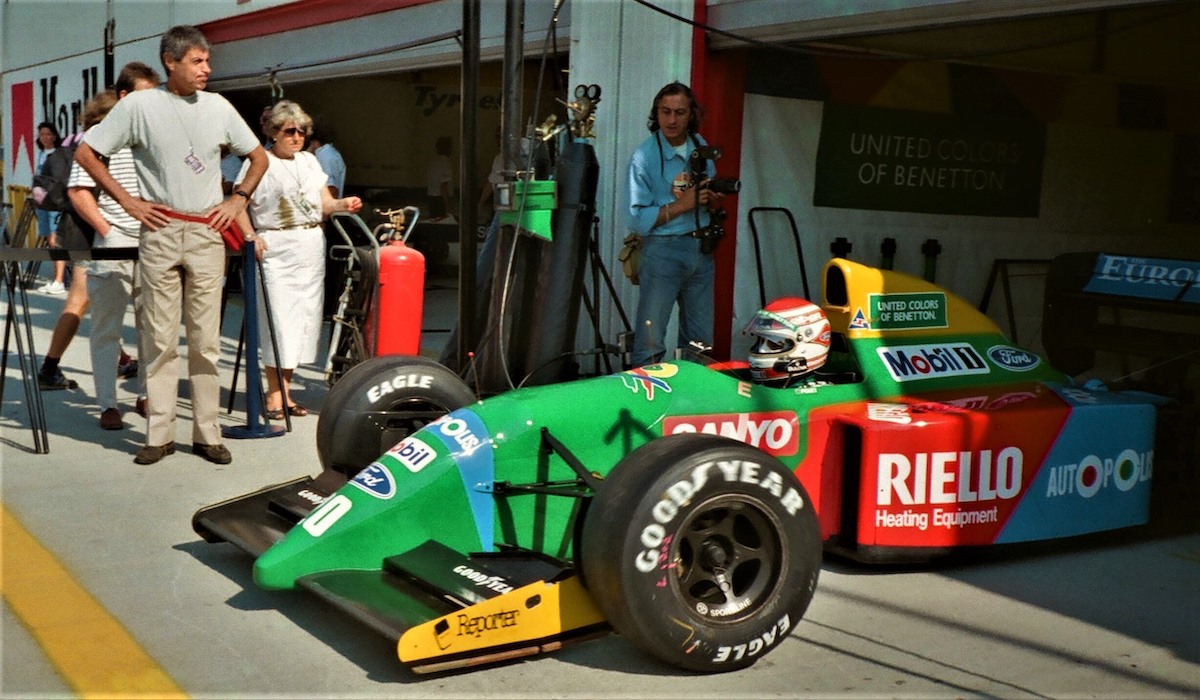 Born in 1952 to a prominent and wealthy Brazilian family, Nelson Souto Major (who later took his mother’s name Piquet) enjoyed a privileged upbringing in Rio de Janeiro. Young Nelson initially harboured ambitions of being a tennis player before switching to motor racing. He had immediate success in lower formulae and reached Formula 1 in 1978 at the age of 26. It may not sound particularly young for a debutant, but it was normal back then to enter the sport at a later age. Bernie Ecclestone immediately saw something in the young Brazilian. The Brabham boss signed him up following a handful of races with Ensign and McLaren. After debuting for Brabham in the final race of the 1978 season, Piquet would spend the next seven seasons with Ecclestone.

For his first full season of Formula 1, Piquet was fortunate to be partnered with Niki Lauda. The Austrian already knew everything one needed to be successful at the pinnacle of racing and was happy to help his young teammate. Their relationship developed into a firm friendship and in the coming decades the two enjoyed each other’s company. I remember a visibly emotional Piquet at the funeral of Lauda in Vienna in 2019. 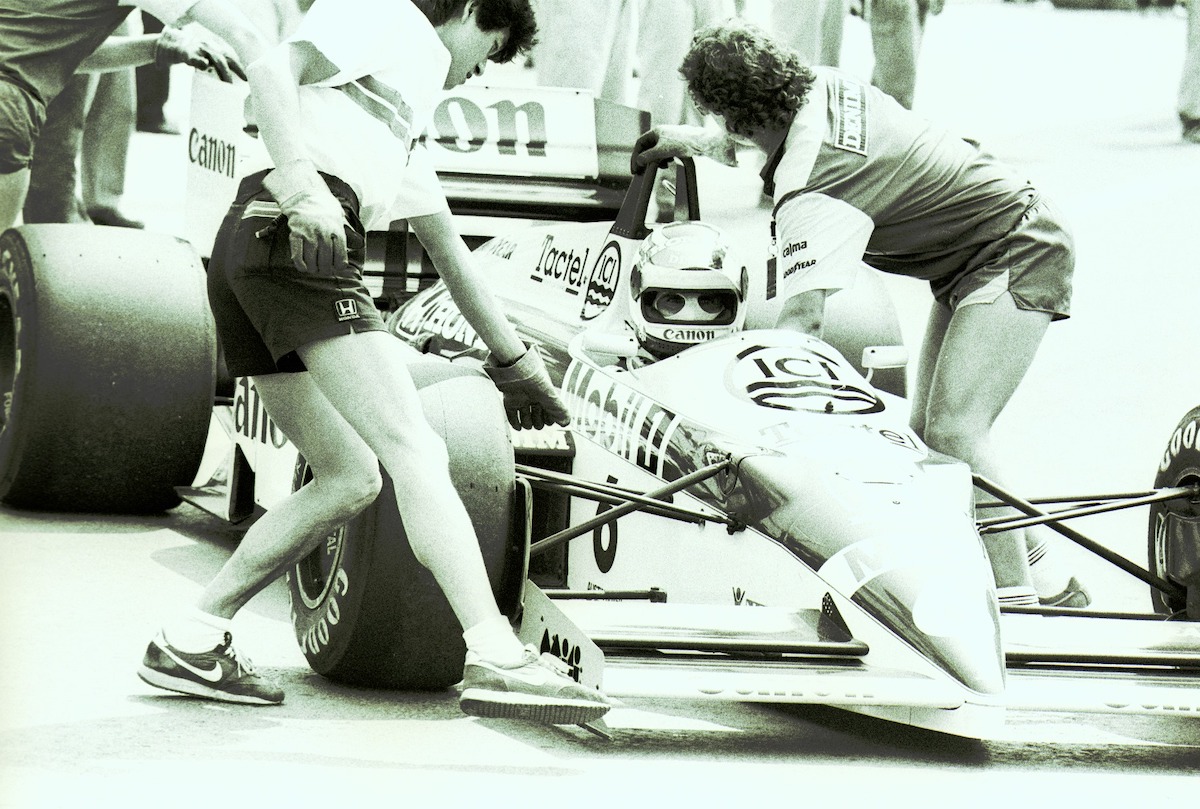 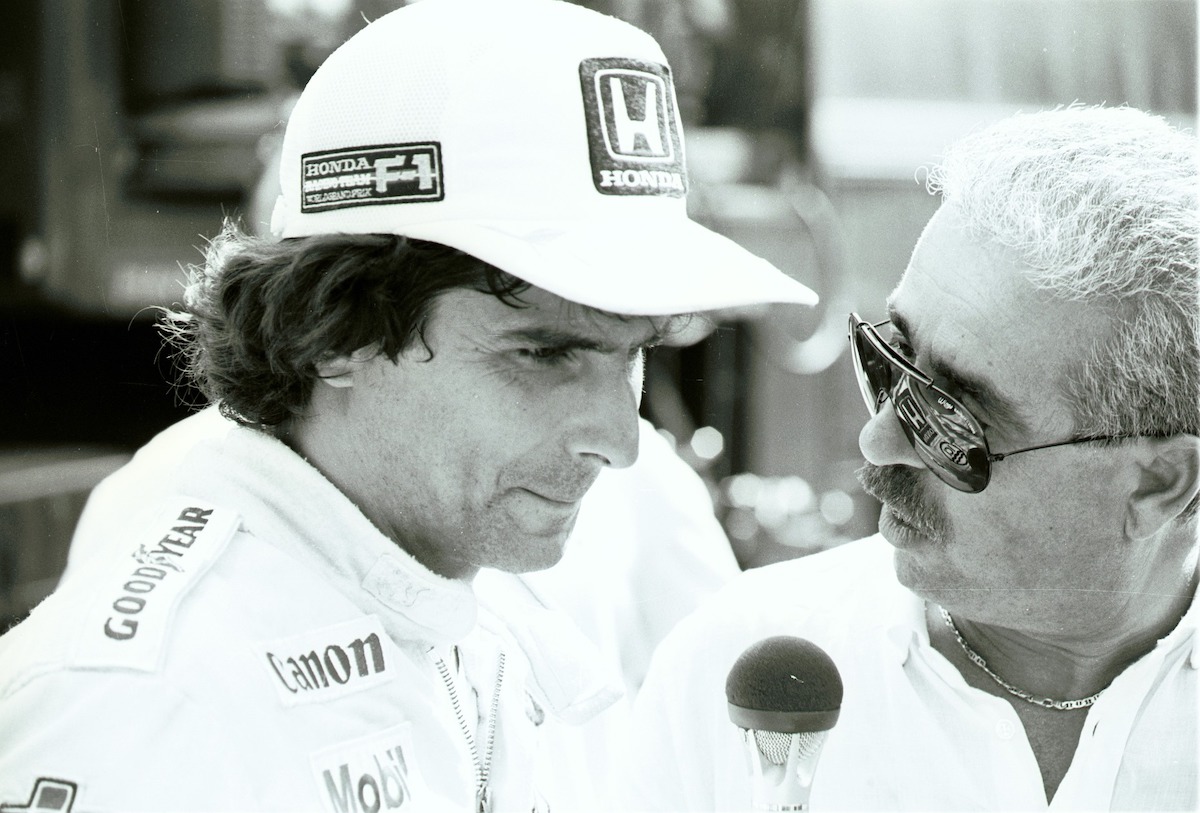 Forty years earlier, the Brabham pair had a very character-building season in 1979 thanks to the heavy, thirsty and reluctant Alfa Romeo engine in their Brabham. Lauda retired before the end of the season and Piquet had to settle with just three points. Piquet didn’t have to wait long for the chance to prove himself. Ecclestone had tired of his dalliance with Alfa Romeo and switched back to Ford-Cosworth power for 1980. The BT49 worked immediately and with the departure of Lauda, Piquet quickly became the team’s clear number 1 driver. The Brazilian turned out to be the leading challenger to eventual champion Alan Jones and also scored his maiden victory at Long Beach. In a changing of the guard for Brazilian drivers, the up and coming Piquet shared the podium in California that day with Emerson Fittipaldi, who would retire at the end of the season.

Piquet had to settle for second in the championship behind Jones in 1980 but wouldn’t have to wait long for his chance. With three victories in Argentina, San Marino and Germany, as well as a string of consistent points-scoring finishes, the Brazilian took his maiden title the following year. He was helped by a fierce battle between the Williams pair of Jones and Reutemann. A modest fifth place in the Las Vegas Grand Prix was enough to seal the title over Reutemann by a solitary point. “[Piquet] did precisely what was required of him. In terms of talent and promise, I think he’ll go on improving,” said Gordon Murray, Brabham’s chief designer.

The following season was a difficult one for the reigning champion. Brabham switched from Cosworth to BMW Turbo power for 1983 and the teething troubles were evident early in the season. Piquet failed to qualify in Detroit and one week later won the Canadian Grand Prix! Renault and Ferrari, the two pioneers of the turbo era were the clear favourites, but in the end the more reliable Brabham-BMW delivered. Piquet became a double world champion at the last race of the year in South Africa. Two more seasons with Brabham did not bring further title success. The tiny BMW engines – putting out 1500 horsepower from a 1500cc unit – were being pushed to the limit and became fragile. 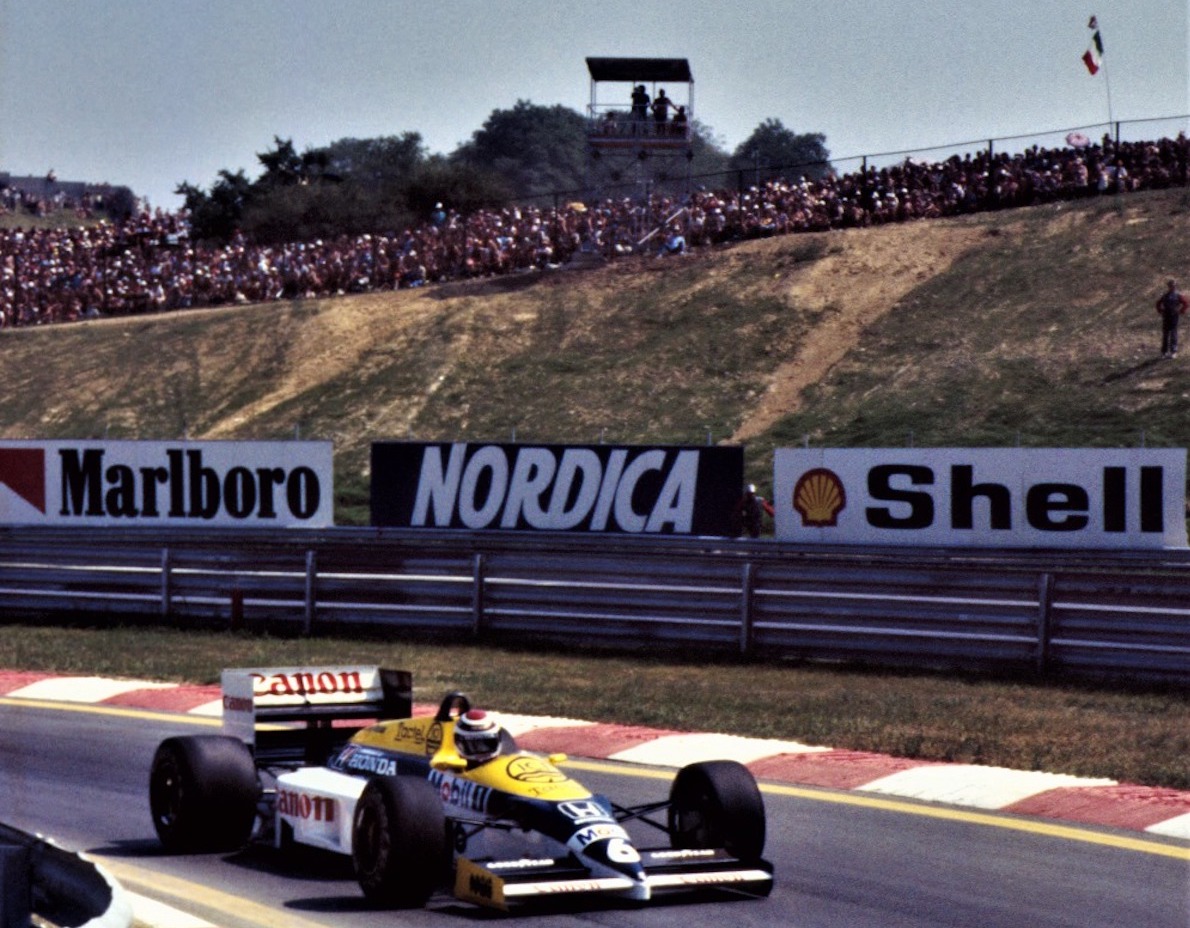 Piquet was offered a deal by Frank Williams, who’s Honda-powered cars were becoming the class of the field and jumped ship from Brabham. The 1986 season should have been a clean sweep for Williams but turned out to be a tragic case of “what if.” Just before the beginning of the season, Frank Williams had his lifechanging road accident that put him in a wheelchair. The mood was sombre in Didcot, despite the fact that Piquet had won his first race for the team. Piquet should have been the hot favourite for the title, but his new teammate Nigel Mansell had other ideas. The Williams-Honda teammates fought a desperate season-long battle in a car that was the class of the field but let the title slip through their fingers. After an explosive end to Mansell’s race in Adelaide, Alain Prost took the title for McLaren. The Piquet-Mansell war continued in 1987, but this time Piquet had more luck and managed to win his third title. “The main difference between us is that Nigel lost two titles and I won three,” a cynical Piquet commented afterwards. Piquet also courted controversy – and the ire of his teammate – with some disparaging comments about the appearance of Mansell’s wife.

Fed up with the politics at Williams and feeling that the team was favouring his British teammate, Piquet decided to join Lotus. On paper, it should have been a good move. Despite having the same powerful Honda engine behind him in 1988, Piquet could only manage three podium finishes against the mighty McLaren-Hondas, which scored 15 wins from 16 races. The first year of the normally aspirated era the following year was even worse. Piquet only collected 12 points from a disappointing campaign that even included a DNQ at Spa-Francorchamps. A big come down for a 3-time World Champion.

Luckily for Piquet, it was not the end of the road. Flavio Briatore, manager of the rapidly emerging Benetton team, was looking for an established name and Piquet was an ideal choice. The Brazilian signed a contract with a relatively low wage that rewarded him a bonus of $50,000 USD per point. And in 1990, the wily old fox was almost always good for some points. Despite points only being awarded down to sixth place in those days, Piquet managed to score on eleven occasions during 1990 and even managed two victories, in Japan and Australia. He had luck on both occasions, of course. At Suzuka, Senna and Prost crashed out on the first corner, then Berger and Mansell failed as well. Piquet inherited the lead and cruised home to victory. In Adelaide, Piquet benefited from the retirement of Ayrton Senna to claim back-to-back wins at the final race of the season and seal a fine third place in the drivers’ championship. 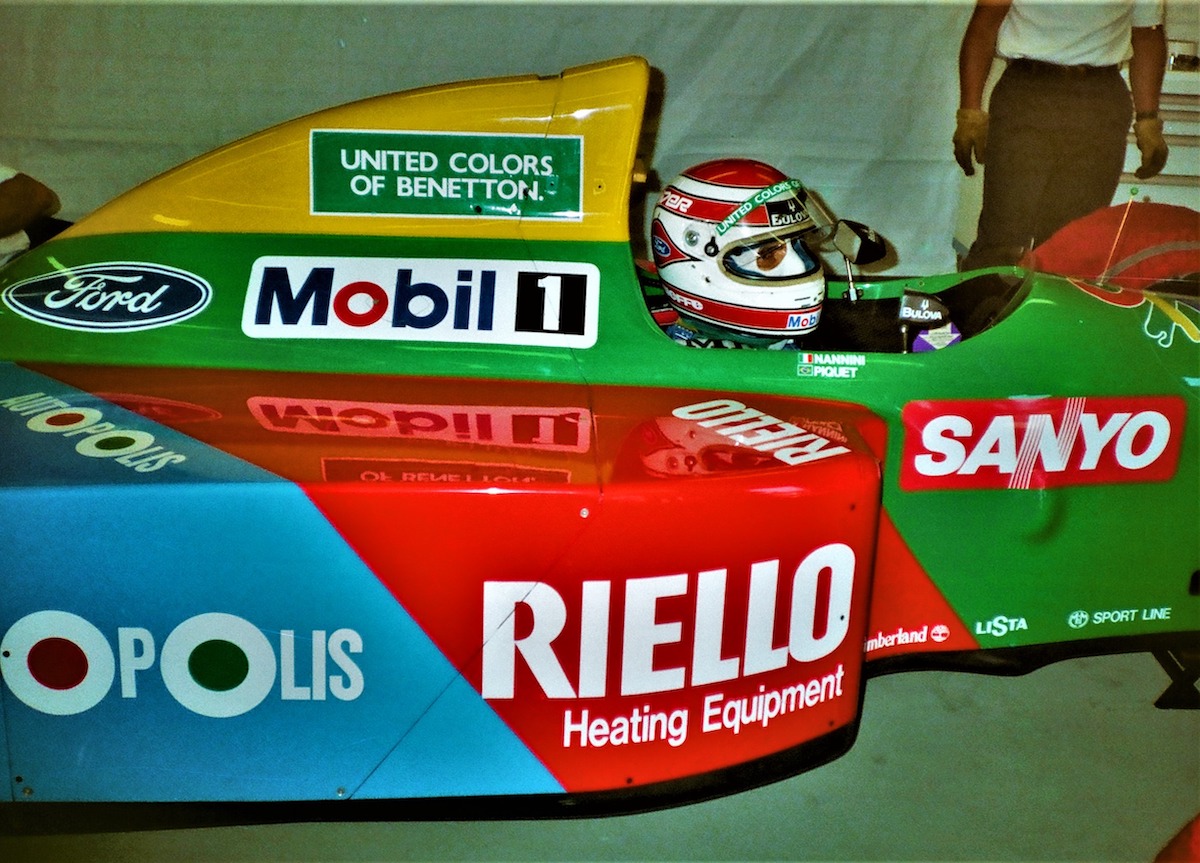 The next year, 1991, would be Piquet’s last season in Formula 1. The Benetton B191 was not as fast or reliable as its predecessor, but there was to be one more golden day for Nelson. His 23rd and final Grand Prix victory in Montreal. And what a way to do it! Old foe Nigel Mansell was cruising to victory when he began waving to the crowd mid-way through the final lap. One clumsy move later and Mansell had cut the engine! Piquet swept through to a surprise victory. The real trouble appeared in Monza when 22-year-old German Michael Schumacher was drafted into the second seat at Benetton after a sensational debut performance in Belgium. Schumacher immediately had the better of his veteran teammate and the writing was clearly on the wall for Piquet. The future belonged to Schumacher and Piquet was the past.

The Brazilian finished a fine fourth in his swansong on the streets of Adelaide and departed Formula 1 with three titles, 23 wins and 24 pole positions from 204 races. Piquet may rarely be mentioned among the greats of Formula 1, but you don’t win three titles by accident. A relaxed character who led an unashamedly glamorous lifestyle and wasn’t always well liked for his forthright opinions. Not that the man himself cares, of course. His legacy is assured.