Formula 1 visits Vietnam for the first time in 2020, with a race at the newly built Hanoi Street Circuit.

Plans for a Vietnam Grand Prix were first explored under Bernie Ecclestone’s leadership, but the project ran cold before he was ousted from his role. Liberty Media later re-opened discussions of a race in Hanoi and in November 2018 the event was finally confirmed to be joining the Formula 1 calendar.

Located in the Nam Từ Liêm district of Vietnam’s capital, the Hanoi Street Circuit is the first new track to be added to the calendar under Liberty’s ownership. The new 22-turn Hermann Tilke designed circuit makes use of both existing roads plus a purpose-built section of track. Construction work on the facilities began in March 2019, one year prior to the first Grand Prix.

The track has been designed with overtaking in mind and draws inspiration from classic sections of iconic tracks, such as the opening section of the Nurburgring, Suzuka’s famous esses and the tight opening corners of Monaco’s street track. Speeds will reach in excess of 330km/h on the 1.5km straight – one of the longest straights on the calendar.

The race marks F1’s latest venture in Asia. Hopefully the multi-year contract will see it become a success, unlike the failed Indian and Korean Grands Prix.

The Hanoi Street Circuit is a temporary street circuit that only hosts Formula 1.

The inagural Vietnam Grand Prix – originally scheduled for April 3-5, 2020 – was postponed due to the coronavirus pandemic. It is not yet confirmed if the race will be staged at a later date in 2020 or moved to 2021.

How to get to Hanoi and the Hanoi Street Circuit.

The capital of Vietnam is located in the northeast corner of the country, not far from the border with China. Noi Bai International Airport (HAN) is the gateway to Hanoi and serves various domestic, regional and long-haul connections. The best way to get from the airport to the city (a distance of about 35km) is to take an official taxi or Grab car (the SE Asian equivalent of Uber).

The Hanoi Street Circuit can be found in the Nam Từ Liêm district, a business area to the west of the centre. The mobility plan has not yet been announced for the 2020 Vietnam Grand Prix, but the best way to get from the Old Quarter to the circuit is likely to be the aforementioned Grab. There are also bus services to the My Dinh Bus Station, 30 minutes’ walk from the circuit.

Where to stay for the Vietnam Grand Prix in Hanoi

Browse all accommodation for the 2020 Vietnam Grand Prix in Hanoi on April 3-5.

While there are some nice hotels near the circuit (notably the Intercontinental Hotel in the Landmark Tower), the best place to soak up the sights and sounds of Hanoi is in the Old Quarter. This is where some of the city’s best touristic sites, restaurants and nightlife can be found. For a more relaxed stay in the city away from the hustle and bustle, you can also consider staying in one of the hotels around West Lake. The areas of Hoan Kiem and Ba Dinh also have a good selection of accommodation close to the Old Quarter. 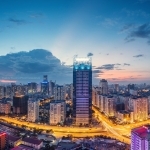 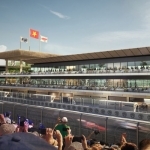 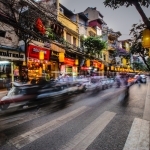 Scooter’s are everywhere in Hanoi 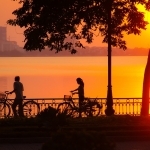 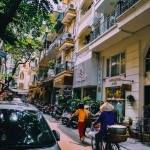 Check out the best tours in Hanoi