Formula 1 and celebrities: a winning combination 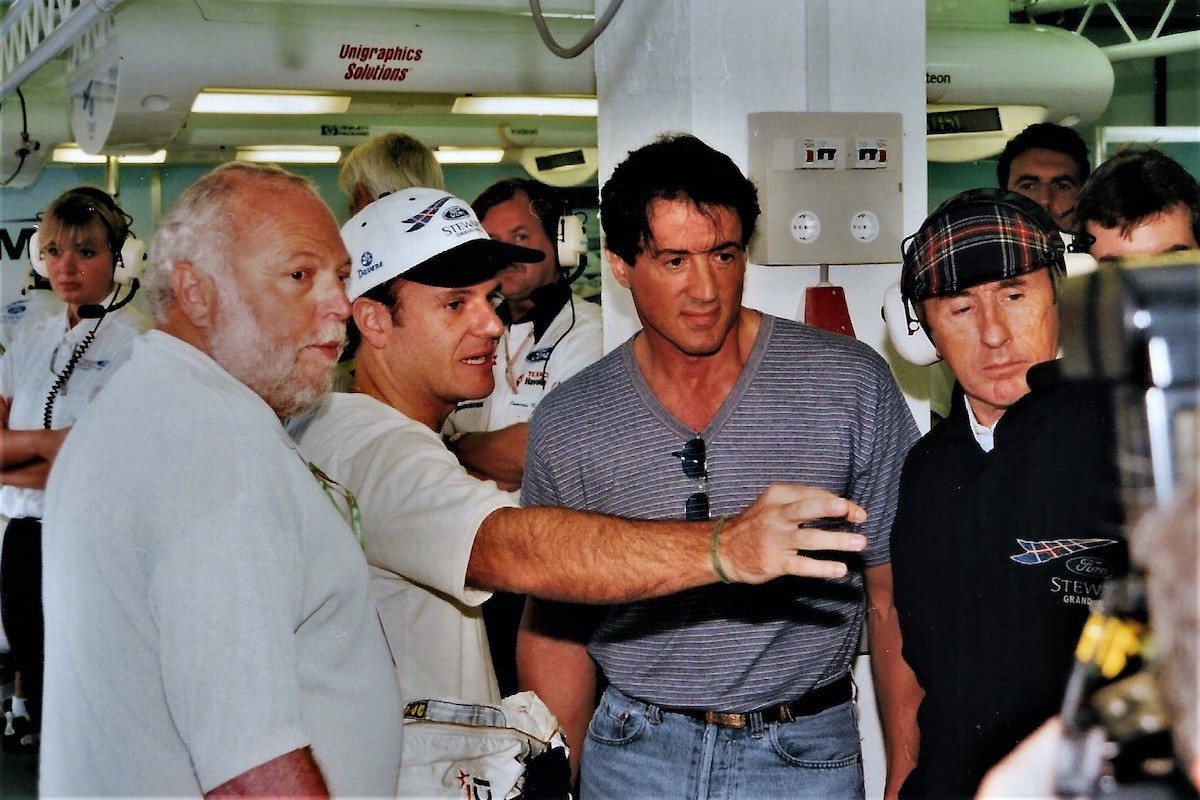 Being a Formula 1 journalist doesn’t only mean working alongside famous drivers and team principals. The Paddock also attracts plenty of VIPs, as Karoly Mehes writes.

Motor racing has always been a magnet for the rich and famous. Monaco was always the most glamorous event, attracting famous actors and actresses during the early years of the modern World Championship in the 1950s. But it wasn’t until the arrival of Bernie Ecclestone that the sport became a serious business. And Bernie had a clear vision of how he wanted Formula 1 to become an elite club. When I began working in the Paddock in 1990, the Paddock had already become an exclusive sanctuary with very limited access, even for the most famous celebrities.

It was a typical win-win situation for all. Formula 1 benefited from hosting celebrities – everyone from actors to supermodels and sports stars to politicians – and the guests had the chance to meet the racing drivers and to get their name in the press. Ecclestone encouraged the teams to invite their own VIP guests to the races. Celebrity endorsement and press interest was especially important for the smaller teams like Minardi, Arrows and Sauber, which were rarely in the spotlight for their on-track exploits. 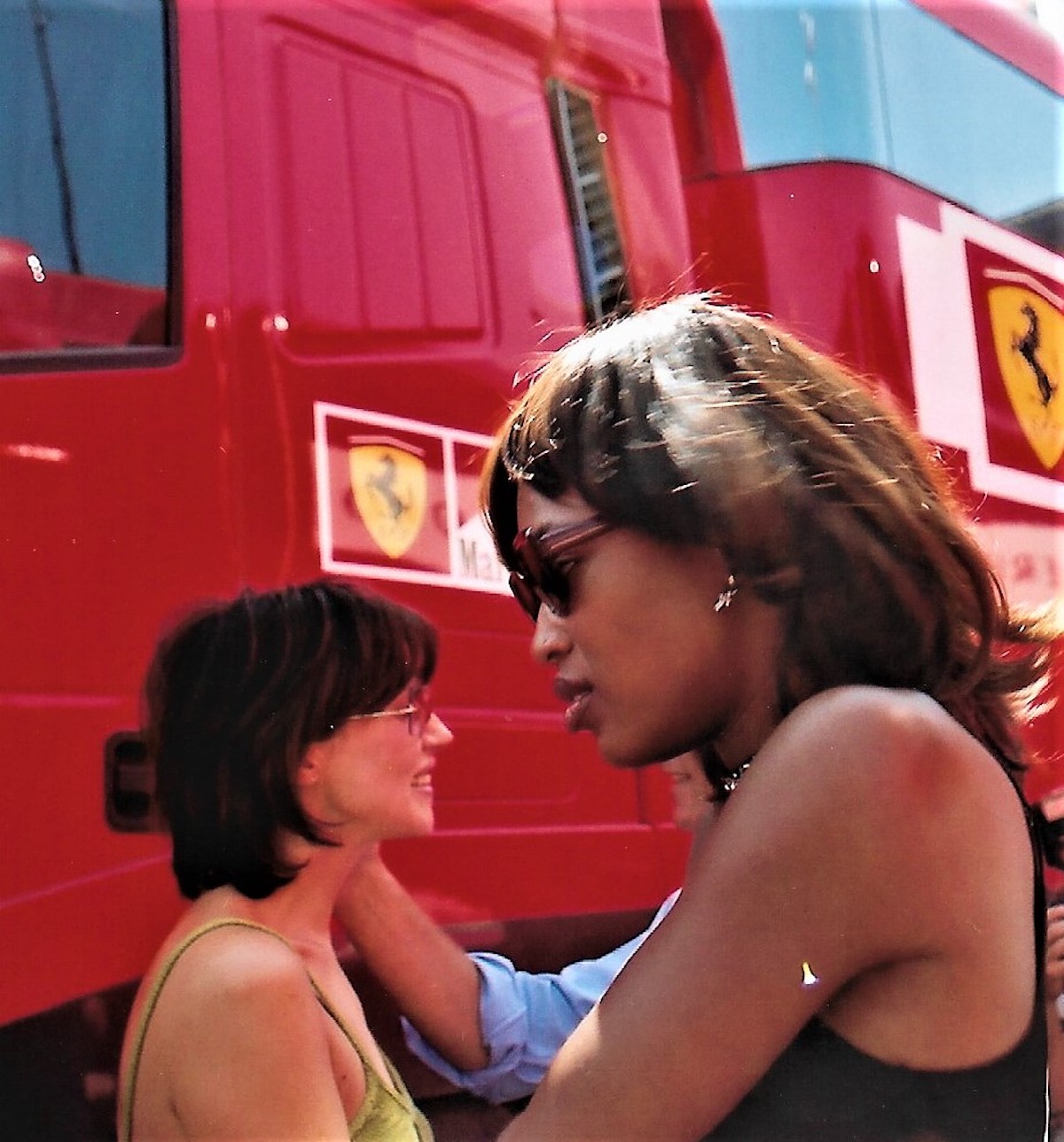 Whenever I noticed a horde of cameramen moving backwards in the Paddock during the 1990s and 2000s, I could be sure that a famous celebrity like Naomi Campbell or Sylvester Stallone could be found somewhere in the middle of the pack. Sometimes it was funny. I remember asking F1 photographer Mark Sutton once who the subject of the press attention was, and he didn’t know. But it didn’t stop him taking a few dozen pics, just to be sure! 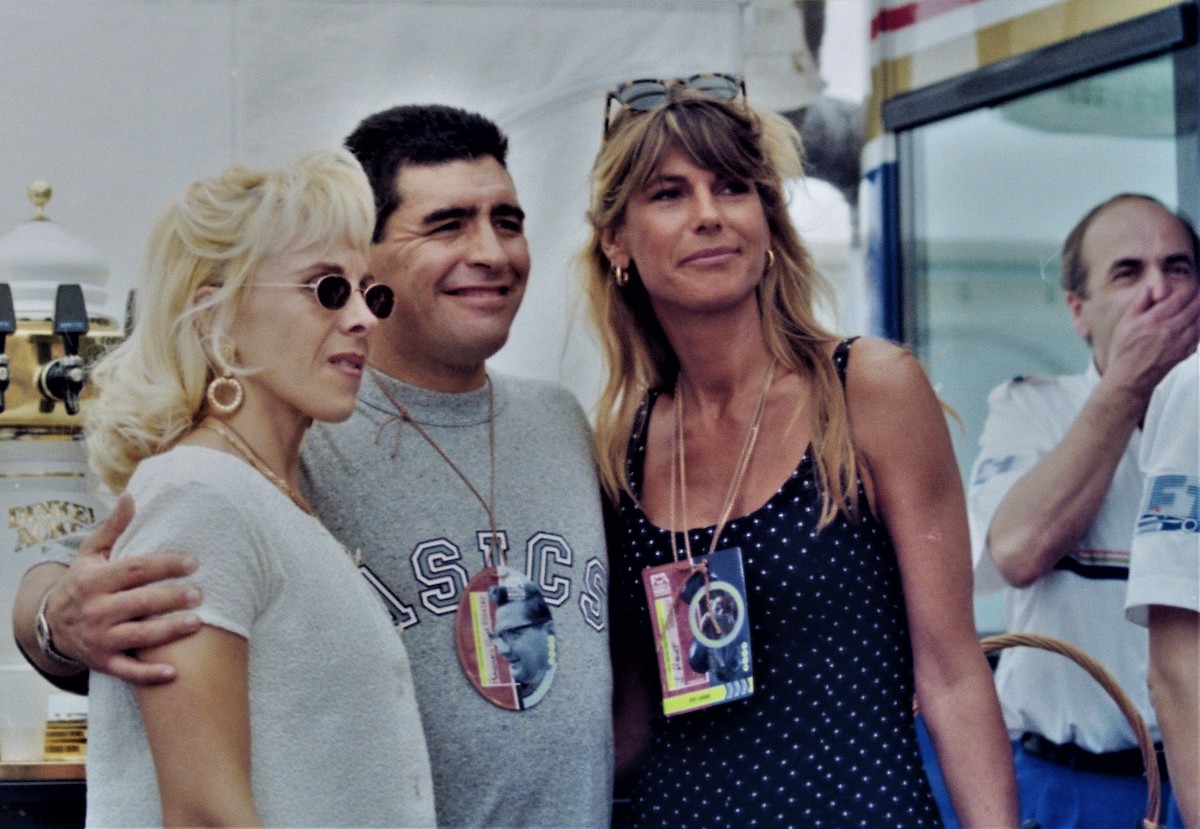 My most treasured celebrity encounter in the Formula 1 Paddock came at the 1995 Monaco Grand Prix, when I was sitting in the Rothmans hospitality tent. Bernie Ecclestone entered and asked if the seats at my table were free. I told him they were and a minute later the presence of backwards walking cameramen heralded the arrival of someone important. It was Diego Maradona, who took the chair beside me. We engaged in a conversation about the 1982 World Cup in Spain, where he had scored for Argentina in a win over my country, Hungary. 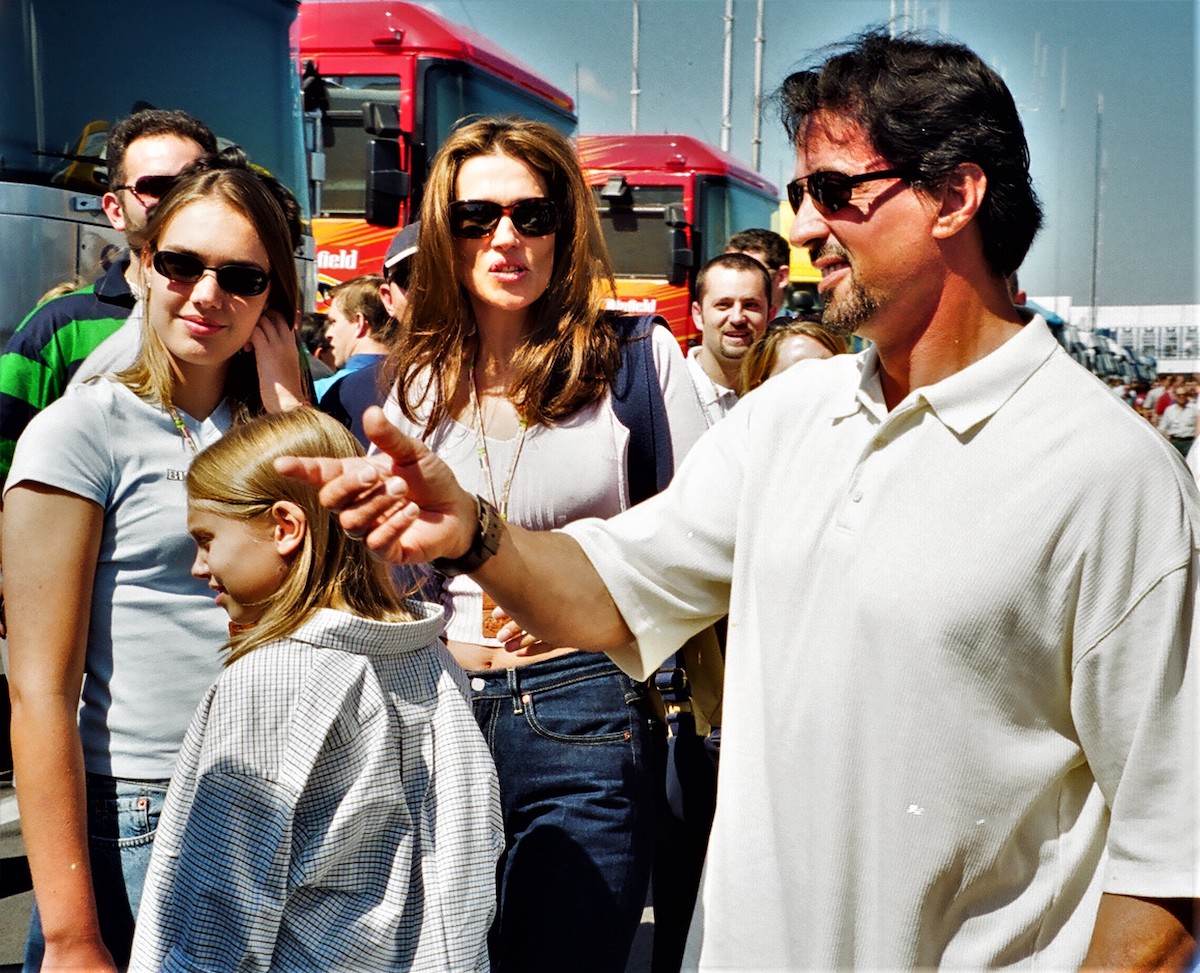 I also met Sylvester Stallone a few times at the Hungarian Grand Prix in the late 90s. He was working at the time with Andy Wajna, a film producer from Hungary, on a film about racing [Driven, 2001]. Stallone visited the Grand Prix twice as part of his research for the film. Stallone was surrounded by bodyguards, but still approachable in this environment and was there was Sly was invited into the Stewart garage to speak to Jackie Stewart and Rubens Barrichello. 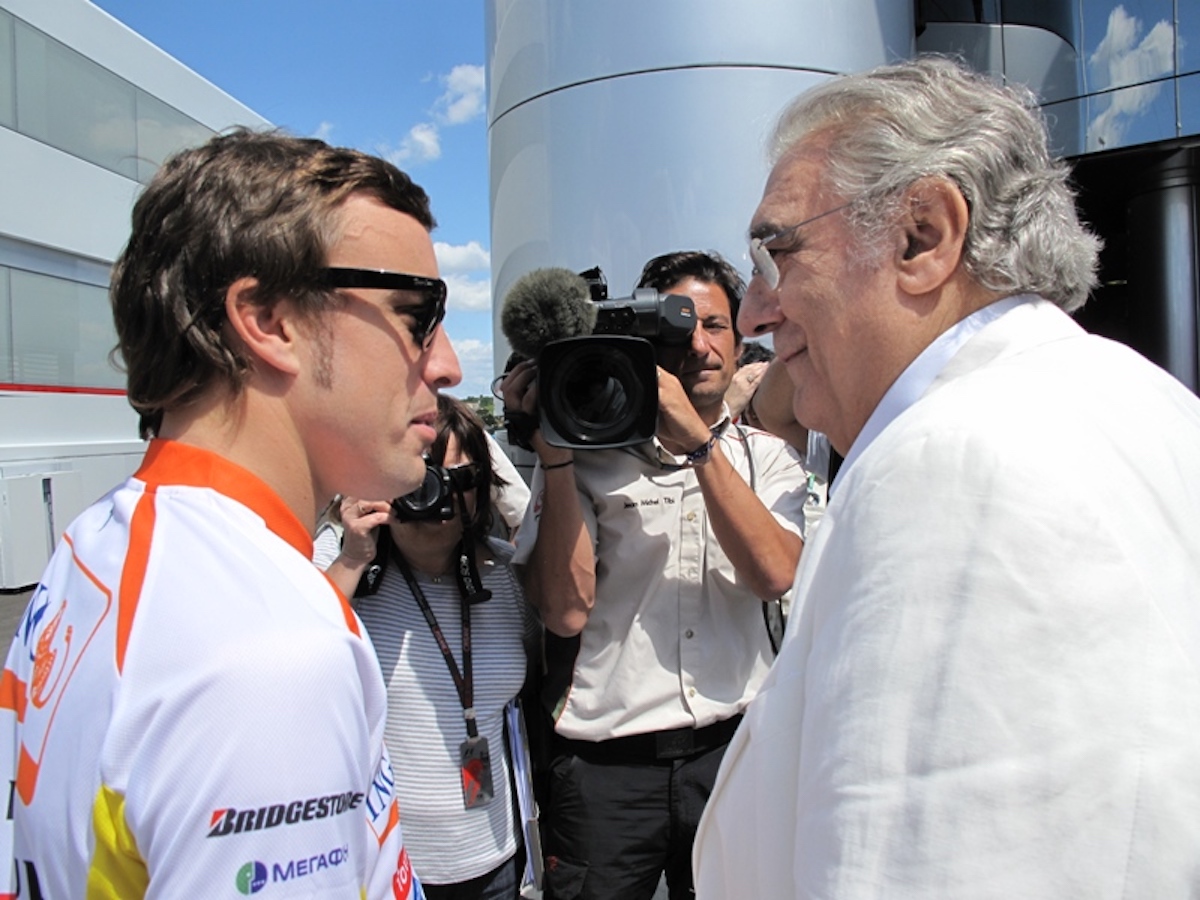 Plácido Domingo is another big fan of F1. The world-famous tenor has been a regular visitor in the Paddock since the 1990s. We also met outside of Formula 1 when he became an international ambassador for my city, Pécs, when it became the Hungarian Cultural Capital of Europe in 2010. More recently, Domingo conducted the podium interviews at the 2016 Spanish Grand Prix when Max Verstappen took a surprise maiden victory.

These are just some of my personal experiences, of course. The new American owners of Formula 1 have continued to embrace celebrities since taking over in 2017, with Will Smith’s cameo at the 2019 Abu Dhabi Grand Prix a particular highlight. The Pirelli Hot Laps programme has also seen various celebrities taken on hot laps at race weekends in recent seasons. The COVID-19 pandemic put all of this to a stop for the time being, but the memories remain. And when the fans return to the track, you can be sure the celebrities will not be too far behind.